Thirty years ago, in July 1991, I drove through the Oxfordshire village of Wytham on my way to my own cottage nearby. It was a particularly hot afternoon. All my car windows were open. And through one of them I suddenly spotted the most beautiful scarecrow, standing proud in her field of corn and flapping her arms in the breeze.

That fleeting moment was all I needed for the story of Tomasina’s First Dance to flash into my mind. Two weeks later I sent it to the children’s books editor at Little, Brown. She loved it and a week later she introduced me to Heather Calder in the publisher’s London office. Fresh from graduating at art college, this was the first time Heather had ever been asked to illustrate a picture book. 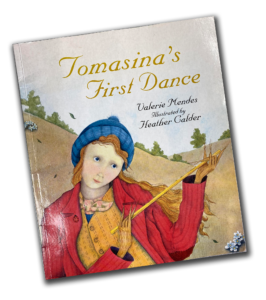 Heather and I met again in Wytham, where she took photos of the fields and gentle hills and sent me an image for the front cover. I have it still, framed in my study in Woodstock. It was exactly and sensationally perfect. The grace, delicacy and humour in Heather’s superb work brought my story to the most marvellous life.

I never saw her again. In one of the biggest mysteries of my life, Heather completed the illustrations and vanished. Nobody knew where she was, and she was determined not to be found. The front cover she’d sent me was replaced by someone else’s hideous work.

So here, thirty years later, is the same story and some of Heather’s glorious images – with my undying gratitude and love.

Tomasina the scarecrow stood very straight in the middle of Appletree Field.
She wore a woollen hat, a crimson jacket and old leather boots.
Tomasina could sing and play the flute.
She knew one hundred tunes and all the words to them.
But she could not move.
When Farmer made Tomasina, he’d completely run out of straw for both her legs.
So her empty trousers hung thin and lifeless beneath her, flapping hollow in the wind and rain.
Tomasina could not walk or dance or run. 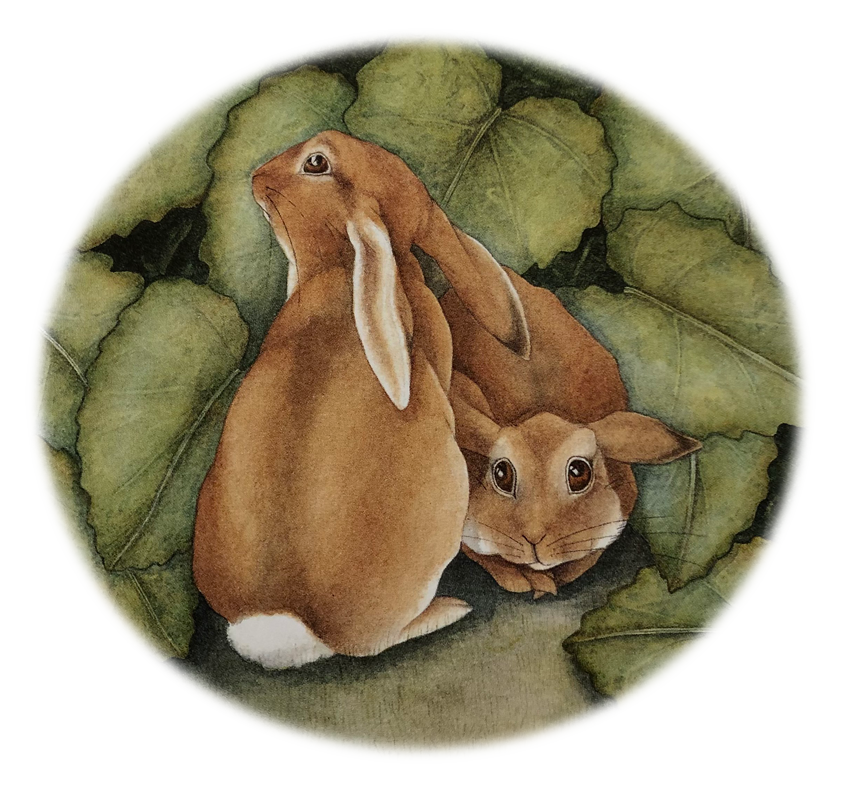 The birds and animals had to be her legs.
Sleek the blackbird was first with all the news.
Fred the field mouse checked up on the facts.
Blobs the ladybird told everyone else.

“I have three best friends,” Tomasina sang, “and eyes everywhere.”

She often needed them.
Kittens, rabbits, ducklings and lambs got lost every spring in Appletree Field.
Tomasina’s team hurried to the rescue, guiding them safely home.
Tomasina would sing her special song, wishing that she could walk.

One morning Sleek flew in excitedly.
“Farmer has made another scarecrow for the field beyond the river,” she flapped.
“I shall go and see immediately,” said Fred, putting on his spectacles.
Tomasina stood up very straight.
“If only I could walk,” she said to Blobs.

“Now then, Periwinkle,” said Farmer, the new scarecrow under his arm.
“You’ve got more straw in you than three scarecrows.
“Get rid of those crows for me or there’ll be real trouble.
“If Tomasina can do it, so can you.” 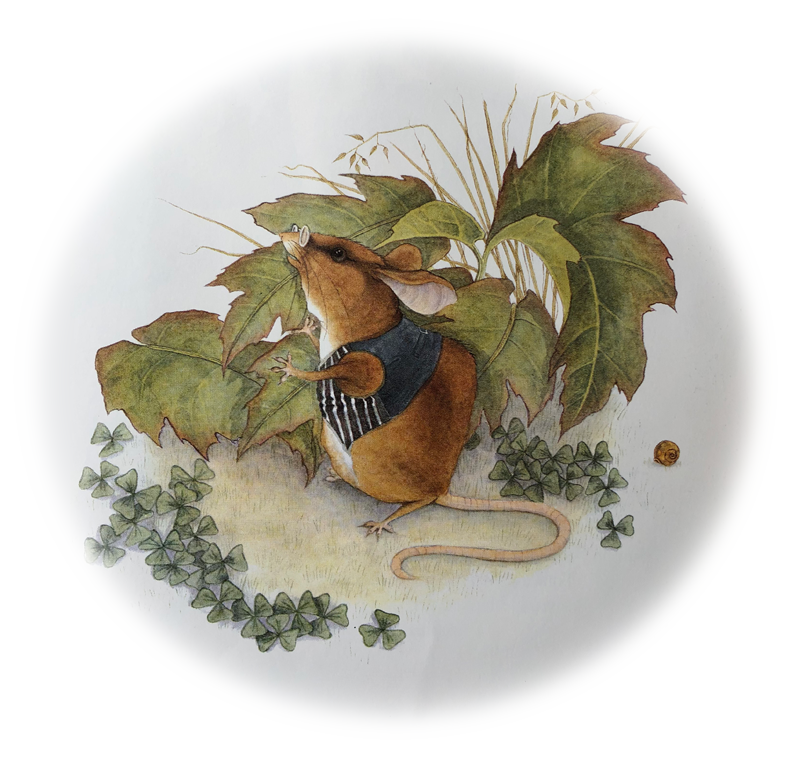 “Yes, sir,” said Periwinkle faintly.
He pulled a handful of straw out of his mouth and sneezed.
His jacket felt tight and a field mouse with spectacles was tugging at his sleeve.
Farmer stuck a post in the ground and thrust Periwinkle against it.

Fred bowed to Periwinkle.
“I am Frederick, Tomasina’s friend.
“She lives over there on the other side of the river.
“Sadly she is unable to leave her field.
“But she knows one hundred tunes and all the words to them.”

Periwinkle’s heart pounded beneath his jacket.
“I should very much like us to meet,” he said huskily.
“Humph,” said Fred importantly. “I shall need to consult her first … Tomorrow perhaps.”
He scuttled quickly away.
Periwinkle looked across the river, wondering why Tomasina could not walk. 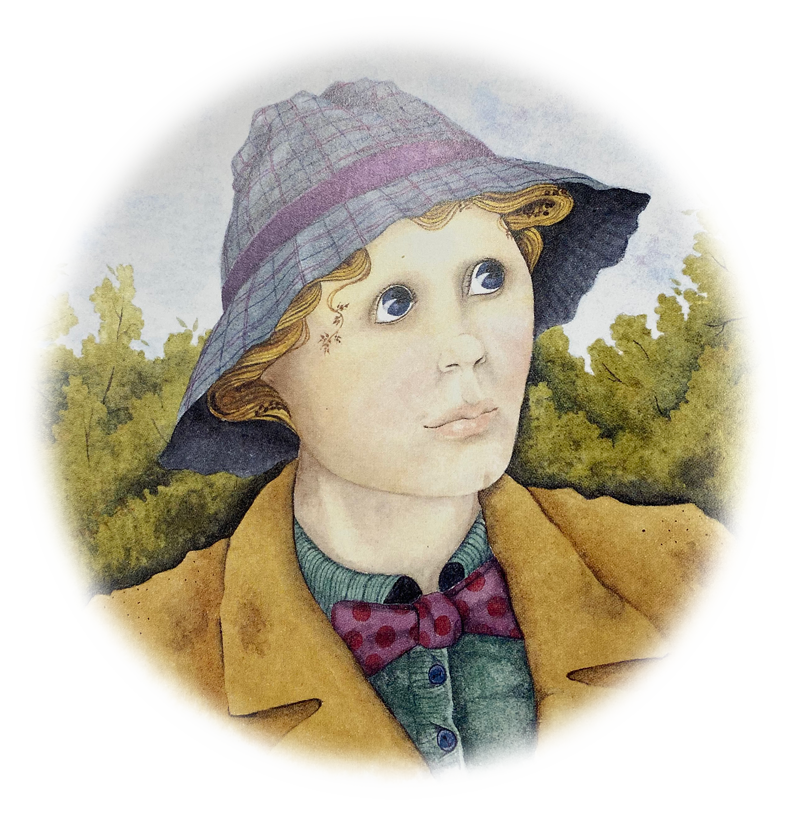 “The only thing I am doing tomorrow,” said Tomasina sadly, “is standing on this spot.”
Grimy tears puddled down her cheeks.
“Look at me. I’m useless. I can’t walk or dance or run, my clothes are old and torn …
Periwinkle will never want me as a friend …”

Sleek, Fred and Blobs held an immediate meeting.
“New clothes for Tomasina,” said Fred. “It’s urgent.”
“I’ll raid the basket in the attic,” said Sleek.
“I can make her a garland of flowers,” said Blobs.
“And I shall inspect the washing line,” said Fred.

As the sun set, Periwinkle stood looking across the river.
“There’s no time like the present,” he said suddenly.
“I must try out these new straw legs of mine.
“I shall go down to the water as soon as it is dark.
“Wait for me, Tomasina. Here I come …”

In the moonlight Periwinkle strode swiftly down to the river.
His legs were firm and strong.
He found some wood and made a tiny boat.
Sleek slept with half an eye.
Periwinkle put the boat in the river and climbed carefully into it. 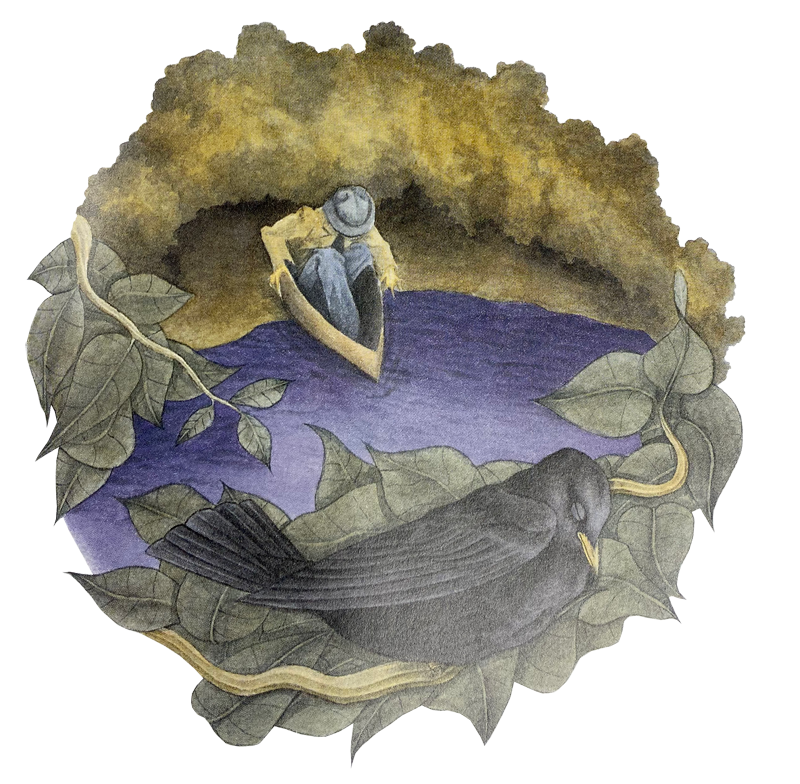 Then he rowed half way across.
But he was much heavier than he thought.
Farmer had stuffed him to bursting with straw.
The middle of the boat split open.
Periwinkle sank slowly to the bottom of the stream.

“Oh my muddy goodness,” Periwinkle bubbled, swallowing a tadpole and several frightened minnows by mistake.
“What am I doing on the river bed? Parsnip pudding.
“I do not want to drown. This is no way to get to Tomasina.”

Above him Fred had reached the river bank.
He had heard the plash of the boat on the river, and now saw Periwinkle’s hat floating on it.
“Help!” he shouted, getting out his megaphone.
“Immediate rescue needed! Fetch me a rope, chaps, quick!”

As Periwinkle floated to the surface of the stream,
Fred threw him a rope from the garden shed.
Periwinkle grabbed it.
He hauled himself heavily on to the river bank and the animals helped to push him on to the land.
The river birds fanned him with their wings. 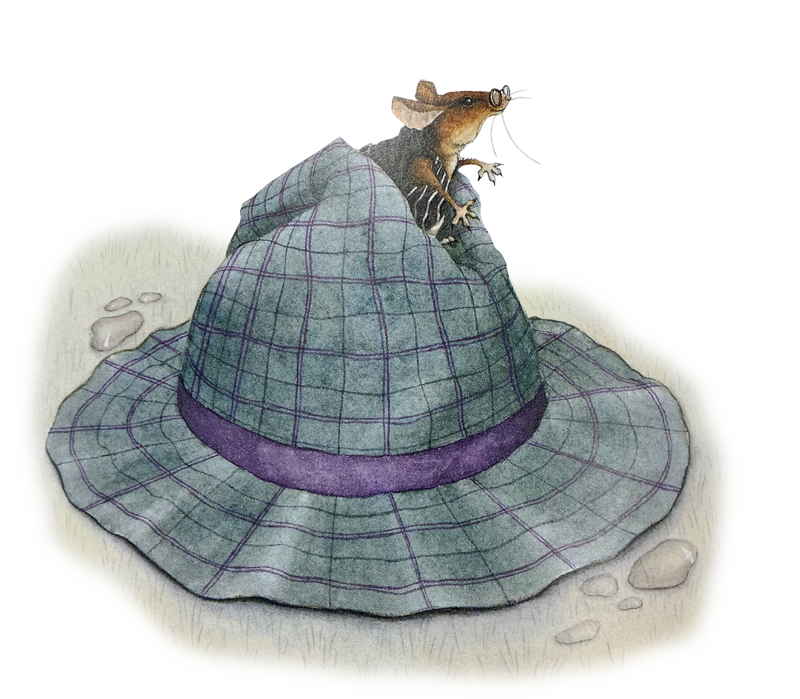 As the sun rose, Periwinkle began to dry.
Clouds of steam drifted from his fingertips.
“The trouble is,” he said, “I have too much straw in my legs …”

Then Fred had a very bright idea.
“Excuse me for asking,” he said, “but could you spare some of it for Tomasina?”
“I don’t understand,” said Periwinkle damply. “Why would she need … do you mean …?”
“Yes,” said Fred. “It’s all Farmer’s fault.
“He didn’t finish making her properly.
“She has straw in her head and arms and body … but none in her legs.
“That is why she cannot leave her field.”

Periwinkle squelched to his feet immediately.
“Nothing in the world would give me greater pleasure.
“I shall give Tomasina all the straw she needs and more.
“Help me, Fred. Take some from this leg first …” 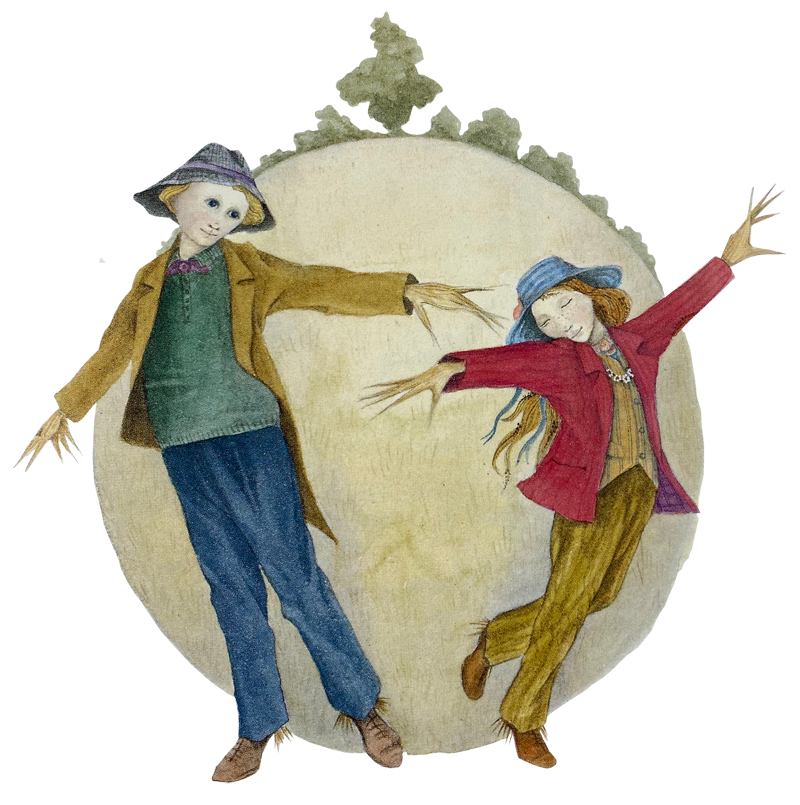 Tomasina the scarecrow stood very straight in the middle of Appletree Field.
Periwinkle bowed and took her hand.
“Good afternoon, Tomasina,” he said. “Frederick has told me so much about you.
“May I offer you some straw for your legs?
“May I offer you my heart?”

Tomasina smiled. Slowly, Periwinkle filled her empty trousers with straw.
Tomasina’s legs grew well and strong.
She began to walk in Appletree Field and then she began to run.
That night she danced with Periwinkle under the summer moon, singing one hundred tunes and all the words to them.